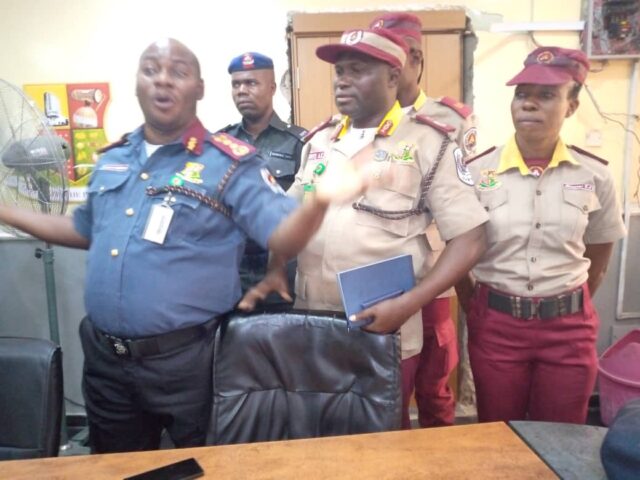 The Oyo State Road Transport Management Authority (OYRTMA) has earlier today reiterated her zero-tolerance to one-way-traffic defaulters across the State.

The Executive Chairman expressed deep regrets over the exponential increase in the number of road traffic accidents attributed to one-way-driving particularly in Ibadan metropolis.

He has, however, directed all Area and Zonal Commanders of the Authority across the Thirty-Three LGAs to impound any vehicle, tricycle or motorcycle found culpable of the act stating emphatically that defaulters would not only be prosecuted but stands a chance of forfeiting their vehicles or machines as the case may be.

In his words, Dr. Fagbemi posited that “the Authority is not oblivious of the geometric increase in one-way-driving among several road users in Ibadan metropolis which has resulted into numerous avoidable road crashes. This is not only a condemnable act, it is a deliberate attempt to murder, maim or destroy the person and properties of other users of the road. It is a characteristic trait of uncivilized society in which Ibadan is not. As the agency statutorily saddled with the responsibility of maintaining sanity on roads across the State, we shall not fold our harms and watch as some individuals destroy innocent and law-abiding citizens. We shall continue to impound and prosecute anyone found driving against traffic in the State no matter how highly placed.”

Speaking further, the OYRTMA Boss revealed that while the Oyo State Road Traffic Management Authority Law 2009 is presently being reviewed to meet trending global standard in the specific areas of effective transport management, advocacy and disciplinary actions against traffic offenders, the management of the Authority has resolved to subject offenders found guilty of one-way-traffic to face the full wrath of the law through a doubled fine totaling a minimum of Fifty-Thousand Naira Only (N50,000.00) or risk complete forfeiture of the vehicle or machine involved, as the case may be”.

It would interest you to know that several media houses in the State has recently reported that the perceived leniency and modesty in the punitive actions melted on offenders are critical factors responsible for the increase in the spate of road accidents and flagrant disobedience of road traffic laws.

“While the Authority would continue in its myriads of advocacy and enlightenment programs against one-way driving and its attendant consequences, defaulters of the extant road traffic laws of the State would be made to face the full wrath of the law” Dr. Fagbemi concluded.

JUST-IN: FG, ASUU To Meet On Monday Over Looming Strike