Ten persons comprising six policemen and four civilians were killed, and 38 cops injured in Lagos during violent protests that erupted last week, the police have said.

The police also said 16 police stations were burnt and 13 vandalised by hoodlums who hijacked the peaceful #ENDSARS protests across the state.

Police Commissioner, Hakeem Odumosu gave these details Tuesday while parading 520 suspects arrested for their alleged involvement in the wanton destruction and looting of both private and public properties.

He said 58 police vehicles were burnt,13 vandalised, 62 vehicles belonging to individuals and those connected with some pending cases (exhibits) were burnt and nine other vehicles vandalised by the hoodlums.

Odumosu also disclosed that 15 motorcycles and tricycles were torched and 65 vandalised at various locations within the state.

“During the unrest, the police posts that were vandalised by the hoodlums included PPL, Mowo, Morogbo, Ikota and Mawa police posts.

“Some private facilities, as well as other investments that were partly torched and vandalised/looted, included the Oba of Lagos’ Palace; Television Continental Station (TVC) at Ikosi-Ketu, Access Bank, GTBank and Ebeano Supermarket at Victoria Island, The Nation Newspaper office at Fatai Atere Street, Mushin, Shoprite Malls at Ajah, LTV 8, Alausa, Ikeja, Surulere, Samsung Outlet at Apple Roundabout, Festac, Shoprite at Festac, Samsung Office Oyingbo, etc. However, some of the looted items from these outlets/offices have been recovered.

“Based on these incidences, the command was able to arrest a total of 520 suspects for various offences ranging from arson, robbery, murder, rioting, malicious damage, and unlawful possession of firearms,” he said.

Among those arrested, Odumosu said, was one Olamilekan Ibrahim, 19, alleged to have been among those who broke into a commercial bank and carted away cash, other valuables in Lekki.

The police said he was arrested with N250, 000 alleged to be his share of the loot from the banks, as well as a locally-made pistol. 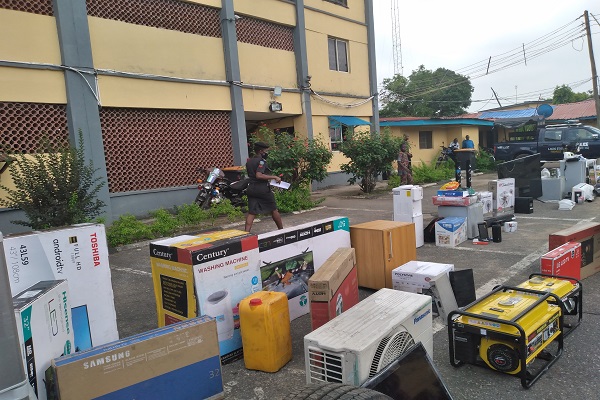 He said two suspects identified as Ebere Reuben, 29, and Samuel Oyediran, 16, were also arrested by RRS operatives for their involvement in burning of the BRT terminal at Berger and TVC Station in Lagos State, respectively. They were allegedly caught with left-over of some quantities of petroleum products with which they set the places ablaze.

The police boss, who acknowledged that those arrested were not peaceful #ENDSARS protesters, stated that it was a known fact armed hoodlums hijacked the protests and were responsible for series of killings, arson and looting recorded.

“Thorough investigation into the cases has commenced. Members of the public should be rest assured that they will be updated as investigation progresses. At this juncture, I will like to appreciate officers and men of this command for their doggedness, gallantry and commitment to maintaining law and order and restoration of normalcy to the state.

“Also, I commend the community leaders and stakeholders for their support in this regard, especially on recovery of the looted arms and ammunition and valuables. They have been so helpful. Last but not the least the command appreciates other sister/security agencies for their support in the struggle for restoration of peace and harmony to the state.

“…permit me to re-assure the good people of Lagos State that we will leave no stone unturned in providing adequate security for all and sundry.

Emphatically, for the ember months, the command has put measures in place to legally deal with the criminals who might want to foment troubles or deprive law-abiding Lagosians of their property,” he said.

But most of the suspects denied involvement in the violence alleging that they were picked up randomly during raids.

One Ibrahim in whose possession several looted items were allegedly found denied the accusation insisting that he only showed security agents were the items were kept in Ebute Meta.

Some of the suspects, who became dramatic, claimed they were either arrested at the bus stop while going about their legitimate duties or apprehended in front of their shops or near their homes.

As the parade ground became chaotic, the police started returning the suspects into waiting Black Maria to prevent breakdown of order.

2019 Elections Would Be Decided By The Youths – ANN Presidential Aspirant, Olawepo

Frontline presidential aspirant and businessman under the platform of Alliance for New Nigeria ANN, Gbenga Olawepo-Hashim has stated that the next year general elections...
Read more
NEWS