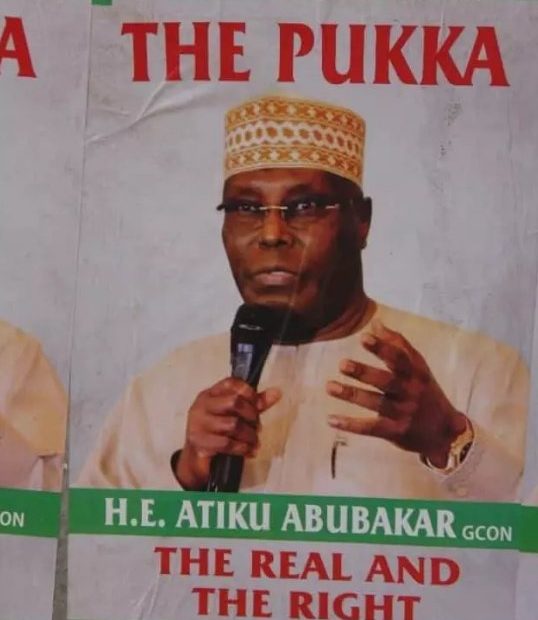 Fresh posters of the presidential candidate of Peoples Democratic Party, Alhaji Atiku Abubakar, with the inscriptions: ‘The real and the right’ yesterday surfaced in the streets of Abuja.

The posters, which also bore ‘Pukka’ a Hindi word, which literally means ‘Genuine’ emerged after a report on how Atiku allegedly enlisted the assistance of two cerebral lawyers in Washington DC, United States of America to lobby the American government for recognition as winner of the last presidential election.

Many of the posters were seen in the Central Business District within the Abuja city centre.

Recall that Lauretta Onochie, the presidential aide on social media, had said she returned to Abuja on Tuesday to see Atiku’s photographs with treasonable inscriptions.

She counseled the former vice president to pursue his election petition at the Tribunal rather than commit to actions that may land him in jail for treason.

However, DAILY POST findings indicate that the posters were sponsored by an Adamawa-based political support group, the Atiku Deservation Movement. DAILY POST

ICYMI: At 38, I’m Happy Even Without Marriage, Children –Don Jazzy

... Urges Readers, Followers To Shun The Story The circulation of a recent report carrying the photograph of the Kogi State Governor, His Excellency Yahaya...
Read more
Politics

The emir of Kano, Muhammadu Sanusi II, will now have control of only 8 out of the 44 local government areas in the state,...
Read more
Politics

PHOTO: Lawan Welcomes Kalu Back to Senate With COVID-19 Greetings