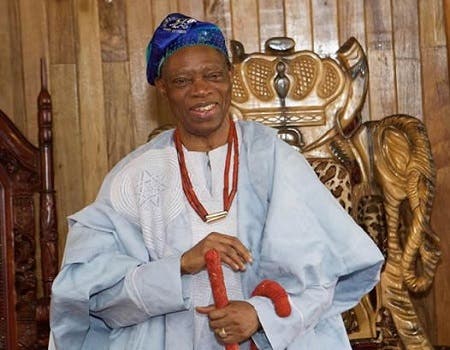 The late monarch was installed in 1999 by the Owo kingmakers but was given the staff of office by the late governor Olusegun Agagu on December 11, 2003

He was a lawyer and received his first degree in law from London, UK and attended Nigeria Law school, in 1968 before practising Law under the tutelage of late Fatai Williams and rose to the peak of his career as a Senior Advocate of Nigeria.

He was a lecturer in the Nigerian Law School, where he retired as a reader in 1999 and he was appointed as Chancellor of University of Benin (Nigeria) in 2005 and later University of Abuja.

He is currently the Chancellor of the University of Jos, a federal university in Nigeria.

He is married to Ololade Olateru-Olagbegi, a barrister and law lecturer at Ondo State University, and they are blessed with children.

He was the former chairman of the Ondo State Council of Oba.

When the ‘Trader Moni’ programme of the Buhari-led administration first filtered the air, we were going to think that for the first time since...
Read more
Politics

The Centre for International and Strategic Studies (CISS) has hailed the Chief of Army Staff (COAS), Lt. Gen. Tukur Buratai for turning things around...
Read more