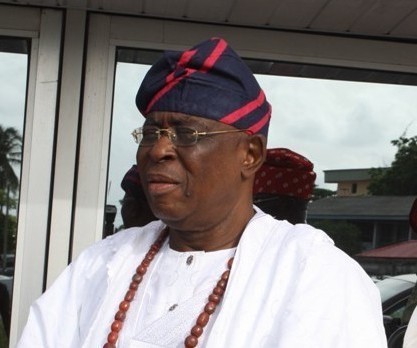 A former Governor of Ogun State , Chief Segun Osoba has dragged a Chieftain of Afenifere, Dr. Femi Okurounmu to court for calling him a traitor and a double-faced military agent .

Osoba through his lawyer , Wole Olanipekun ,SAN, demanded the payment of N3 billion among others.

In a letter addressed to Okurounmu, obtained by our correspondent, Osoba accused Okurounmu of making libelous statements in two national newspapers (Daily Independent and The Sun ).

The statement read inter alia “arising from the foregoing, we have the further instruction of our client to demand from you the following:

“Directing a retraction of the said interviews granted by you and published in the Daily Independentnewspaper of Thursday, July 11, 2019 and the Saturday Sun newspaper of July 20, 2019;

“Public apology to our client to be published on the front pages of seven (7) consecutive editions of both newspapers, starting from Monday, 29th July, 2019;

“You are given fourteen (14) days from the date of this letter within which to comply with our client’s simple demands; otherwise, our final instruction is to commence proceedings against you, claiming reliefs in terms of the said demands, plus aggravated and exemplary damages

Governor Seyi Makinde has sent names of three nominees to be screened and confirmed as commissioners to the Oyo State House of Assembly.Though details...
Read more
BREAKING